Arturito is the classical name for a parrot. Sure enough this one is called Arturito. He waves hello with his foot and also says HOLA except that I missed the shot.

This parrot reminded me of the story my mom always told about a parrot, names Arturito, of course, that they had growing up. Arturito used to wake them up. HUGO! JULIO! JUANITA! LEVANTENSE! ( Hugo, Julio, Juanita wake up!) . He also new a couple of obscene words which of course he called out whenever there was company. My uncles always claimed the parrot learned those awful words in the previous home he lived in. 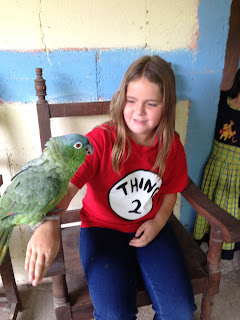