I already told you about our easter trip to San Rafael Pie de la Cuesta, San Marcos. Well one of the eco activities we did was visit the Igualdad Falls. (The Equality Falls).

From San Rafael you drive to San Pablo, that is a main road, then you have to head towards the community Igualdad. (Equality). It is at the end of the road, about 30 minutes from San Pablo on a road that gets bumpier and narrower as you go (keep on though, its worth it)

The most exciting aspect was to see how organized the community is around this attraction. You know you are there because there is a big billboard and community men are ready to help you park and collect the parking fee. Everyone is super friendly. 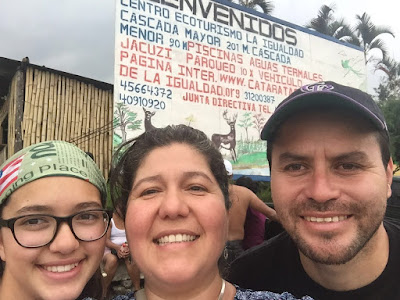 You walk through the town, people have food to sell, the way is marked and you are just glad  the government is not involved. It is a protected area but private.

We went on Good Friday so all the way to the falls we found people. We were of the few that were going toward the fall most everyone was wrapping up the day and almost all the about 300 people we crossed with on the way told us we were late.

Most of the people seemed like they were local people from villages around, nobody with REI outfits or fancy backpacks or camelbacks, just people enjoying a family outing. It is on the side hill of the Sierra Madre, the vegetation is as natural as it gets, the colors, the smells, the sounds and it just fills you up with all good things.

The walk going is first down hill (the only thing I could think of was that I had to clim the hill coming back). After about 15 minutes you start climbing and after about 10 minutes you get to the first falls and the hot spring pools. That is were the paying post is. People form the community are there charging, they take care of security and ornate. The community also gets the chance to sell water, some people also charge to help you carry your pic nic basket, it's just great! I think we payed Q10.00 per persona,  its  a bit more if you are going into the thermal pools and  you might have to pay more if you want to camp. We asked how many people had visited today an according to the tickets sold about 800 people.  I probably shouldn't write this or the government will want to take control and ruin everything!

After that point we walked another 15 minutes up hill and there they were! The tallest falls in Guatemala and some claim the tallest in central america. The sign at the community says 201mts drop the official protected area website says 184 mts. Regardless of how tall the drop is they are amazing! 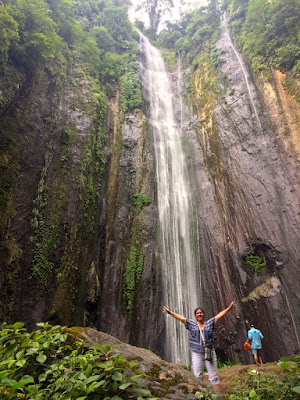 You can see the pool that forms at the bottom it is cold water. Next time we will bring swimsuits.

The vegetation and the energy there is just amazing 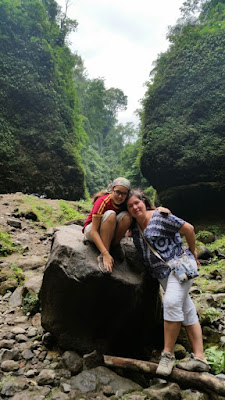 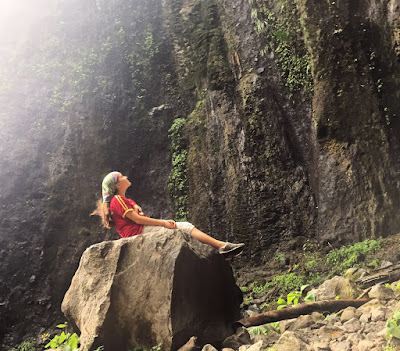 Coming back was also really nice, couple of people were still coming "in" so now we said you are late! Although most of them actually weren't since they were going to stay camping.

Such a wonderful post and article!! Thank you so much for sharing this post.. We provide a india travel agency Swan Tours at very cheapest price. If you want to book tour then this is the best option for you.